Principal co-ordinates analysis, or PCoA, is a visualization method to study the similarity or difference of data. Compared to the principal component analysis (PCA), the main difference is that PCA is based on Euclidean distance, and PCoA is based on distances other than Euclidean distance, and finds the potential principal components of the overall difference through dimensionality reduction. In short, PCoA analysis is a non-binding data dimensionality reduction analysis method that can be used to study the similarity or difference of sample composition and observe the differences between individuals or groups.

Commonly used PCoA software includes PCoA diagram and PCoA analysis package in R language. The PCoA mapping is mainly divided into three steps. A specific similarity distance (such as Bray-curits, Unifrac) is first selected and the distance matrix calculated. PCoA (can be done with pcoa command) is then performed, followed by the PCoA graphics (can be displayed with ordiplot command or ggplot). 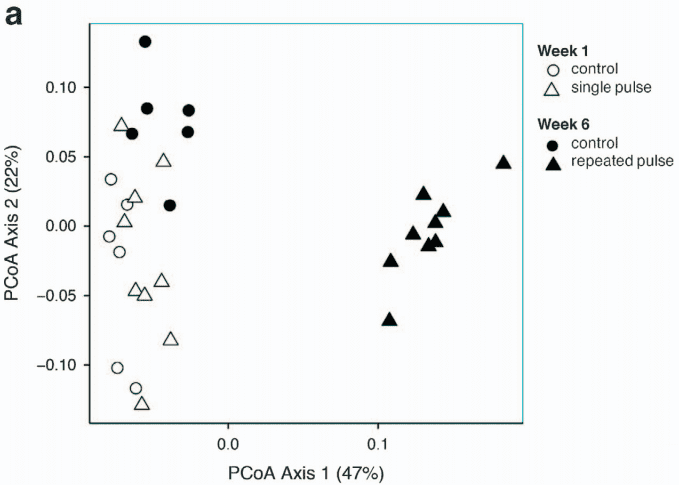 Different shapes or colors in the PCoA diagram represent sample groups under different environments or conditions. The scales of the horizontal and vertical axes are relative distances and have no practical meaning. Among them, PCoA Axis 1 represents the principal coordinate that explains the largest data change, and PCoA Axis 2 represents the principal coordinate that accounts for the largest proportion of the remaining data changes. The spatial distance of sample points represents the distance between samples.

During microbial community structure research, such as 16S and metagenomic sequencing analysis, PCoA sequencing methods are often used to understand the similarities and differences in microbial evolution. A biological information service provider, CD Genomics can provide the PCoA services. We can set different distance algorithms according to your needs and provide analysis report. If you have any questions or analysis needs, please feel free to contact us.